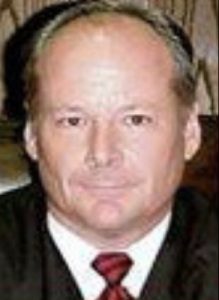 Judge Burton Conner had the unusual opportunity to interview with two governors before Governor Rick Scott appointed him, on February 14, 2011, to the Fourth DCA. Judge Conner confessed to friends, family, and members of the 19th Circuit Bar at a celebration of that appointment why he was a bit relieved when our just-departed governor punted the appointment process to our new governor.

The morning of the Governor Crist interview, “I got up, showered, shaved and went to get my suit. When I pulled my suit coat off the hanger, there were no pants there,” Judge Conner recalled as the attorneys burst into gales of laughter. “I can’t even begin to tell you how that felt.” He interviewed that morning with the governor’s staff in his jeans, but secured a pair of slacks for the afternoon interview with the governor. But the pants misfire did not end his tumult for the day.

“It was my birthday – and one of my daughters called to wish me a happy birthday. She knew I had the interview with the governor, but had thought it would have been over when she called me. I quickly stopped the cellphone from ringing and apologized profusely. My daughter, however, was very persistent. Three minutes later, she called again! I simply told Governor Crist, ‘This is not my day for interviews.’”

Sharing that self-effacing story with hundreds of friends and fellow Bar members demonstrated one of the many values Judge Conner learned from his mother – humility.

Growing Up: “I have an Overdeveloped Sense of Responsibility”

His mother, Barbara Conner, raised Judge Conner and his four siblings – two sisters, two brothers, Burton the second-youngest — in Bradenton. “My mother was a school lunchroom manager. We didn’t come from money.” His mother could not give him money but she gave him something much more valuable – a strong work ethic. Because of that upbringing, Judge Conner explained, “I have an overdeveloped sense of responsibility. I’m someone who will work and keep working until I get the job done.” Judge Conner explained that all members of his family agree that Conner knew how he would apply that work ethic from the earliest days of his life -“my earliest recollection is that ever since I was five or six years old, I knew I wanted to be a lawyer. That is something everyone in my family remembers.“

That work ethic sustained Judge Conner through both Duke University as an undergraduate and the University of Florida as a law student. He graduated both schools with honors, even though he took a year off when he was 21, and he and his wife had their first child. “My first child was born the day I turned 21. My mom used to say that I became a man and became a dad on the same day.”

His ‘overdeveloped’ work ethic enabled Judge Conner to graduate UF Law in 2.5 years. He refused to take summers off. During that time in Gainesville, he interned in the Public Defender’s Office, working with longtime Eighth Circuit Public Defender Rick Parker – “a phenomenal influence,” in Judge Conner’s words. After graduation, Judge Conner knocked on all the legal doors where he grew up in Bradenton and the surrounding area, but could not find a position. Instead, he landed at the 19th Circuit Public Defender’s Office when Elton Schwarz, the public defender at the time, hired him. It was 1978.

His year in the 19th Circuit Public Defender’s Office took him to Okeechobee once a week to represent individuals charged with crime in that small county, and from there he drew the attention of well-known local attorney, Tom Conely. “Tom needed a litigator as he was getting out of litigation,” Judge Conner said. Judge Conner fit the bill. After five years working for Conely, Conely encouraged Conner to apply for a county-court position. Judge F. Shields McManus, now a circuit judge in St. Lucie County, recalled serving on the Judicial Nominating Commission that nominated Conner. “He was the best candidate . . . he was still a young lawyer, but his demeanor was serious and humble. It bespoke of maturity beyond his years.” Governor Bob Graham affirmed Tom Conely and the JNC’s confidence by appointing Judge Conner to the Bench.

After serving a full four-year term on the Bench, Judge Conner surprisingly lost a contested election in 1988. Undaunted by the setback, he started his own solo practice. “I did civil litigation, family, probate, transactional work – everything except for personal injury.”

Following nearly a decade of solo practice, Judge Conner found himself appointed for a second time to the judiciary, this time by Governor Lawton Chiles. Chiles appointed Judge Conner to the circuit bench. Judge Conner’s varied background in private practice gave him an interesting perspective on the problems that were brought to him by the litigants, and by the system.

From the beginning of this tenure at the circuit court, he began honing skills that would serve him well on the appellate bench. “I had some very good early experiences as a circuit judge with collaborative decisionmaking. I was a juvenile judge in St. Lucie County, and that exposed me to the Executive Roundtable. In St. Lucie County, there is a roundtable of the CEOs of the various entities or agencies who have either a statutory responsibility or funding pot of money to work with children. Once a month those CEOs attend the roundtable to talk about the children of St. Lucie and collaboratively problemsolve. The superintendent, the police chiefs, county commissioners, sheriff, Healthy Start officials, Health Department executives, school board members, Department of Juvenile Justice administrators and Department of Children and Families administrators – all working together to solve issues with children.”

These different people achieved great success in the community. “We came up with a truancy night court program; I’ve been doing that for ten years. The program was very successful. We did it two nights a week; the parents came in every month and we monitored a case for six months or so, working with the parents to make sure they got their kids to school. The single-moms, holding down two or three jobs and leaving for one of those jobs at 5:30 a.m., understandably found it tough to get their children to school. Many times, we turned the problem around, and at the night court we would give the hard-working mother a hand, when we had success. It was a very collaborative effort with a cross-section of the community. A diversity of experience and talent coming together to problem solve. And I continued with that program even after I left the juvenile bench because I found it so rewarding.”

Collaborative problem-solving became a theme of Judge Conner’s tenure on the Circuit bench. “In 2001, I was asked to become involved with the Supreme Court ADR [Alternative Dispute Resolution] Rules and Policy Committee. I’m up for re-appointment to the committee and I suggested a life sentence – I think it’s that good. We work with the best people involved in mediation and arbitration; recommending to the Supreme Court the rules which should apply to mediation – in family court, civil court, juvenile court, etc. That led me into working with the statewide mortgage mediation program that we initiated a few years ago. This involved twenty men and women from across the state, with very diverse backgrounds, figuring out what we were going to do about the mortgage crisis the state began experiencing a few years ago.” These successful efforts at collaborative problem-solving persuaded Judge Conner that he should apply for appointment to the Fourth DCA: an appellate court representing the most logical place in the court system for collaborative decision-making. He had no expectations that he’d gain appointment, and Governor Scott surprised him when he called on Valentine’s Day in February to let Judge Conner know he was the pick. Governor Scott told Conner: “I’ll be watching you very closely because you are my very first judicial appointment.”

On His Appointment to the Fourth DCA

For inspiration in his new role, Judge Conner looks to another judge who progressed from the county court to the appellate courts: former Florida Supreme Court Justice Major Harding. “Major Harding stands out in my mind as someone I want to pattern myself after, partly because he was both a county and circuit judge before becoming a member of the Florida Supreme Court. I think that progression isaverygoodone.Iwillbeamuch better appellate judge because I had a significant amount of time as a county judge, and even more significant period of time as a circuit judge.”

Judge Conner sees his new role as part of a team effort. Once again, he is in the role of working with a group – this time two other appellate judges on a panel, along with the staff of the Fourth DCA – to productively resolve problems. Conner emphasized that despite his many accomplishments, he knows he has to earn respect each day – not simply expect it. “I feel strongly that it’s important as a judge that I earn respect, not demand it. I feel it’s important to earn it.” That thought again demonstrates the humility Judge Conner learned from his mother.

Although the judges must earn respect, Judge Conner believes the judicial branch deserves respect as an entity that is perhaps the most important of the three branches of government. “The executive branch has the power of the militia. The legislature has the power of the purse. But if I’m a judge in a courtroom and I order something, what power do I have? The power of the judicial branch comes from people believing they should do the right thing. They believe in doing what’s right – the law should be about making sure we come up with the right decision when people have disputes. That’s the beauty of our system.” At the same time, the courts – and the other branches -must have respect for the law, particularly our state and federal Constitutions. “We must be careful with tampering with the Constitution. We don’t want the winds to blow and change it too easily.”

If an appellate litigator is looking for a tip on how to prepare for the state’s newest appellate judge, that practitioner should consider one of Judge Conner’s favorite expressions: “be careful what you ask for.” That expression has proven true during his years on the bench, and he expects more of the same on the appellate court. So when you finish up your brief or oral argument and ask for the remedy or result you prefer, make sure you have thought through the implications of that remedy – for both your client and the law.

Even after a long and very successful legal career, Judge Conner remains humble, hard-working, and passionate about the law. No wonder Governor Scott appointed him to the Fourth District Court of Appeal.

Mark Miller of the Appellate Law Office of Mark Miller, P.A. is a solo appellate attorney in Stuart, Florida. This is Mark’s first article for the Record.