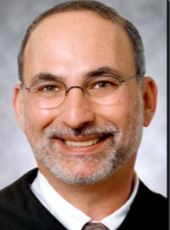 The Third District Court of Appeal Chief Judge Juan Ramirez, Jr., welcomed the audience and remarked on the privilege it had been to serve with Judge Gersten for over eleven years. Judge Ramirez praised Judge Gersten’s collegiality and enthusiasm.

The first of Judge Gersten’s chosen speakers was his senior law clerk, Kimberly J. Kanoff. In recognition of her Judge, Ms. Kanoff narrated a slideshow that depicted Judge Gersten’s active involvement in the community, the court, his family, as well as his varied interests, from his rock band to his cars and scouting.

From the Miami-Dade County Court, Domestic Violence Division, Judge Rosa C. Figarola lauded Judge Gersten for his role as coach to the St. Thomas university School of Law’s Mock Trial Team, in addition to his storied career as a trial judge and appellate judge. Also a coach for St. Thomas’s mock trial team, Judge Figarola spoke with high praise of Judge Gersten’s role as a mentor to the students at St. Thomas, and presented him with a gift on behalf of the students of St. Thomas.

Judge Gersten coached four St. Thomas students to win the national championship at the ABA Mock Trial Team. These students, Lincoln Atten, Bryan Paschal, Joey McCall and Bill McHugh, introduced as the “Four Horsemen,” were the undeniable highlight of the ceremony as they each described how Judge Gersten impacted their lives and provided individual guidance that led to their personal and professional development in law school. The incoming coach of the trial team stated that Judge Gersten met the definition of mentor: “trusted friend, counselor, and teacher.”

Judge Gersten’s life-long friend, Christopher Gallen, informed the crowd that even from childhood, he knew that Judge Gersten would succeed. He recounted stories of their shared childhood in Miami Beach, and praised the “redwood of a man” into which Judge Gersten had grown.

In response to this outpouring of praise, Judge Gersten thanked the crowd, the speakers, and his many “families,” including his home family, his court family, his St. Thomas family, and all those he had the good fortune to encounter during his career. He praised and thanked all the judges, present and past, responsible for administering the framework of the law. The Judge expressed his “greatest faith in the judicial branch.” With that, he looked ahead to his exciting new role in the legal community and committed himself to adding to its fabric. He removed his robe and embraced his family and friends.

Chief Judge-Elect of the Third District Court of Appeal, Judge Linda Ann Wells, concluded the ceremony. She thanked Judge Gersten for his long and loyal service to the Court.

Judge Gersten attended the university of Florida where he earned both his undergraduate degree in 1973 and his law degree in 1975. He was admitted to the Florida Bar in 1975, the united States District Court, Southern District of Florida in 1976, and the Colorado Bar in 1989. From 1975 until his election to the bench in 1980, Judge Gersten worked in private practice. He was elected as a County Court Judge in 1980, a Circuit Court Judge in 1982, and re-elected to the Circuit Court in 1988. In 1989, Governor Bob Martinez ap- pointed Judge Gersten to the Third District Court of Appeal, where he was retained by the voters in 1990, 1996, 2002, and 2008. By unanimous vote of the Judges of the Court, Judge Gersten was elected as Chief Judge and served for a two-year term, from July 1, 2007, until June 30, 2009.