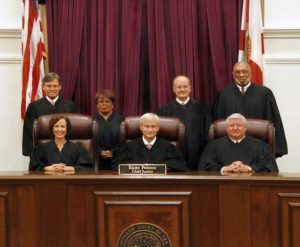 Continuing a long-standing tradition, the entire Florida Supreme Court heard the final round of the Robert Orseck Memorial Moot Court Competition at the Florida Bar’s annual meeting, held June 23, 2012. The competition, now in its forty-fourth year, is presented by The Florida Bar Young Lawyers Division. The issues centered around the First Amendment rights of students who wished to wear a particular logo, neatly embroidered on the sleeves of the students’ otherwise dress code-compliant polo shirts, in violation of a fictional school district’s prohibition against any clothing promoting religious discrimination. The moot court competition began like any other, but after the law students’ arguments – and before the Court’s “ruling” – the lawyers and law students in attendance heard the Court’s views on more practical matters in an informal seminar entitled “Discussion With the Florida Supreme Court.”

Bellus first asked each justice to give his or her professional background before being appointed to the Court. Notable among the anecdotes told by the justices were the stories of success and failure that each experienced along the way. The justices were also asked to describe their responsibilities at the Court, apart from deciding cases. The justices’ many roles range from exercising rule-making authority to imposing discipline, and from serving on Bar and Court committees to volunteering within their own communities. Chief Justice Canady serves as the chief administrative officer of the entire Florida court system, which often requires trouble-shooting and solving problems.

When asked the toughest part of the job of being a Florida Supreme Court justice, several justices mentioned the tedium associated with the Court’s rule-making authority. The justices also highlighted the differences between the Court and the three-judge panels of the district courts of appeal. Given the sheer number of cases before the Court, all of which must be decided en banc by the Court’s seven members, the justices noted that it can sometimes be difficult to convince another justice to vote for a particular outcome. While the caseload can be demanding, and the work unrelenting, the justices greatly value their role in the judicial process. Justice Jorge LaBarga opined that being a supreme court justice was the best job of all.

The invitation to the justices to “describe your pet peeves” resulted in the usual responses: overly-long briefs and lawyers who do not know or – worse, still – misrepresent the record. Chief Justice Canady mentioned that he finds any attempt by lawyers to denigrate opposing counsel or the lower tribunal to be especially coun- terproductive; Justice Ricky Polston was surprised to find that some lawyers will actually interrupt the justices at argument. The justices emphasized that although appellate counsel should always know the record, it is far better to admit that you don’t know an answer to a question than to misrepresent the record at oral argument.

The justices were then asked whether they had any advice for nervous lawyers arguing before the Court. Justice Peggy Quince responded that as a young appellate lawyer, she always welcomed questions from the court. She emphasized that lawyers should listen to the questions asked by the justices, as those ques- tions often give the lawyers insight into the Court’s concerns.

With the exception of legally and factually complex appeals – like the recent redistricting cases – the Court does not often extend the length of time granted for oral argument. While the Court does consider motions to extend the time for argument, those motions are rarely granted.

Questions as to the potential impact of budget cuts on the courts had no easy answer. The justices noted that the statewide budget for the clerks of court had been cut by $30 million. This reduction, the Court believed, would affect the clerks’ abilities to fulfill their duties, even as the clerks tried to minimize the impact.
The justices cautiously broached the sensitive question of merit retention. Education is key. The justices urged Florida lawyers to take responsibility for educating the voters, few of whom understand the history of the merit retention system and its importance in maintaining an independent judiciary. The lawyers in attendance were reminded, once again, that practicing law is a privilege, and one we must act to protect.

Judge Canady concluded the discussion with his thanks – which included thanking the moderator for choosing “easy questions” for the justices. He announced the winner of the moot court competition as the appellee, the fictional Sunshine County School Board. Representing the appellee, the audience learned, was the moot court team from Nova Southeastern University. The justices also congratulated the team from Florida Coastal (which represented the fictional appellant parents challenging the school board’s policy) for its performance in a difficult competition. Echoing Justice Canady’s appreciation for the law students’ presentations, Justice Pariente noted that both teams demonstrated great responsiveness to the questions asked from the bench, and emphasized that honestly conceding a minor point at oral argument can enhance an advocate’s credibility with the Court. And, with that one last reminder to advocate professionally on behalf of your clients (whether fictional or otherwise), the justices concluded another successful and informative “Discussion with the Florida Supreme Court.”

Rebecca Bowen Creed is an appellate lawyer with Creed & Gowdy, P.A. She earned her undergraduate degree from the University of Virginia and attended law school at the University of North Carolina at Chapel Hill, where she graduated with honors. She is board certified in appellate practice by The Florida Bar and a member of the Section’s Executive Council.