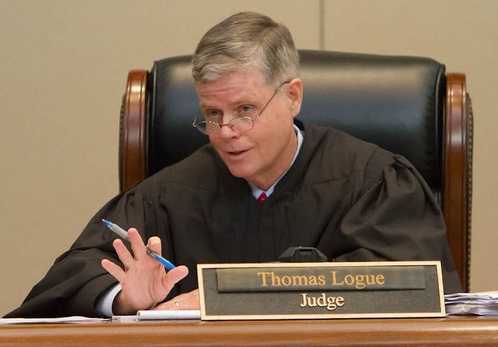 Judge Thomas Logue is the newest face on Florida’s Third District Court of Appeal. He received his appointment to the bench on July 6, 2012 from Governor Scott, filling the vacancy created by the resignation of Judge Juan Ramirez, Jr. On announcing Judge Logue’s appointment, the Governor said, “Tom brings to the bench an impressive record as a litigator and appellate attorney. Equally impressive is Tom’s abiding commitment to judicial restraint. His career and his scholarly writings demonstrate a deep understanding of the notion that the rule of law, and not personal preference, must prevail in our courts.” Indeed, Judge Logue’s commitment to public service is impressive, and he brings to the bench a breadth of knowledge in many substantive areas of the law.

“Dedication is not what others expect of you, it is what you can give to others.” – Anonymous

For thirty years, Judge Logue was an Assistant County Attorney for Miami-Dade County. He litigated in state and federal courts at both the trial and appellate levels, as well as practiced before administrative bod- ies, such as the Florida Cabinet. He was named a “Top Government Attorney” by Florida Trend Magazine and the South Florida Legal Guide and received an AV rating from Martindale-Hubbell. His areas of practice in the County Attorneys Office spanned the areas of constitutional law, torts, contracts, taxes, civil rights, zoning,

real estate valuation, copyrights, and bonds. Judge Logue has served as the legal advisor to the County Com- mission, the property appraiser, and to various zoning and quasi-judicial boards. He has also drafted state and local legislation and negotiated major contracts on behalf of Miami-Dade County.

Perhaps not surprisingly, Judge Logue enjoyed appellate practice before the Third District more than any other area he worked in. “I enjoy the craft of writing briefs. I particularly like honing and polishing the brief after the first draft,” he said. And once before the court, Judge Logue remembers that “arguing cases before judges like Thomas Barkdull, Alan Schwartz, Dan Pearson, and Gerald Cope was an intellectual roller-coaster ride. They were brilliant and down-to-earth at the same time.” Another reason he enjoyed appellate work is “the fact that appeals shape the law. I got a big kick out of those occasional appeals that resulted in ‘trophy’ opinions which resolved important issues and which were later cited in other cases.”

When asked what benefits he perceived from staying with the same employer for 30 years, Judge Logue said: “Serving as counsel for county or local governments is a wonderful career for the right person. More lawyers should consider it. You work on matters of concern to your community. You litigate against some of the best lawyers in the State. You get to wear the ‘white hat’ a little more often than some of your friends in private practice. Judges, lawyers and citizens expect a higher level of professionalism and fairness from you, which raises the level of your practice.” Given these benefits, it’s easy to understand why Judge Logue stated that he “loved working at the Miami Dade County Attorney’s Office.”

In addition to his public service, Judge Logue has also taught Florida Constitutional Law as an adjunct professor at both the University of Miami School of Law and St. Thomas University School of Law. When asked what it is about constitutional law that interests him so much, he stated, “I believe our U.S. Constitution is one of the great evolutionary advances in world history. But it is only half the story. Our state constitutions are the under-appreciated, other-half of the American constitutional tradition.” In fact, Judge Logue has a keen interest in the development of the Florida constitution, noting it has a “particularly interesting and tumultuous constitutional history with a new constitution being adopted for the Jacksonian, civil war, reconstruction, redemption, and the civil rights eras of our history.” Not content to just lecture, Judge Logue has also published articles on takings, federalism, civil procedure, administrative law, and legal theory. As you might expect from one so committed to public service, Judge Logue has also been active in a number of professional and civic groups. He is a member of the Spellman-Hoeveler American Inns of Court and served as a Director of the Dade County Bar Association, where he also chaired numerous Bar Committees. He is a trustee and founding member of the 11th Judicial Circuit of the State of Florida Historical Society. He was also vice-chair of the Coral Gables Charter Review Committee and served as a member of the Governor’s Ad Valorem Tax Task Force. In addition to these commitments outside of his career, Judge Logue also found time to provide pro bono appellate advocacy on behalf of abused children, for which the Guardian ad Litem Program for the 11th Judicial Circuit honored him. When asked why advocating for children was important to him, Judge Logue responded, “[i]t is uplifting to help a child in danger find the safety of a nurturing home.” He encourages others to take cases for abused children, noting that these appeals are “a great way to do pro bono work.” He cautions that “not every case has a happy ending, but some do.” In addition to helping a child, this work “increases your pride in your profession, your confidence in your legal skills, and your gratitude for many things you might otherwise take for granted, such as your own upbringing and family. There can be a spiritual side to practicing law.”

Speaking of family, Judge Logue is himself blessed in that respect. He has been married to his wife, Sheila, for over thirty years and boasts that she is his college sweetheart. They have three teenage daughters and live in Coral Gables.

“We judge ourselves by what we feel capable of doing, while others judge us by what we have already done.” – Henry Wadsworth Longfellow

Judge Logue was not content to sit on his laurels. After 30 years of dedicated advocacy on behalf of Miami- Dade County, Judge Logue decided to apply for appointment to the Third District Court of Appeal. When asked why he applied for the position, he responded, “I believed I had something to contribute to the court. I consulted friends who understood the process and they encouraged me. For thirty years, it had been a dream of mine to be on the Third.” Unquestionably, Judge Logue has many talents to offer the citizens of Florida through his service on the bench. During his tenure on the Third, Judge Logue has a few legacies he’d like to leave. First, he would “hope to write a few serviceable opinions.” He also said that, “when and if appropriate, I hope to write opinions reinforcing our tradition of the separation of powers, which is one of the pillars of American freedom.”

At the time of this article, Judge Logue has had a few months of experience on the bench. Asked what advice he would offer to practitioners, he honed in on oral argument, saying, “[i]n the Third District, you can bank on the fact that the judges have studied the briefs and independently reviewed the record. So do not waste your limited time providing back- ground. Jump right to the dispute. Explain why the facts favoring your client are pivotal to deciding the appeal. Tie the essential facts to the statute at issue or the appellate opinions closest to your position.” Judge Logue also advises practitioners that “you will be asked to distinguish specific cases cited by your opponent. You may well be asked to name and discuss the one case that you believe most supports your position. Some lawyers seem genuinely surprised when they get these questions. They are easy pitches. Be ready to hit them out of the ballpark.” Finally, the judge advises lawyers to “remember, of course, that the decision of the trial judge below must not only reflect legal error, it must constitute harmful error.”

Judge Logue was also gracious enough to share how he prepares for oral argument now that he is on the court. He says that he studies the briefs, prints and reads the key cases, reviews the trial order being appealed, and examines the most pertinent parts of the record, such as the affidavit or contract at issue, or the pages of the transcript containing crucial testimony. He frequently asks his law clerks to brief specific issues as well. In regards to his own questioning style during oral argument, the judge noted: “I appreciate a full airing of the strengths and weaknesses of the opposing positions so do not assume that the questions I ask reflect how I am going to rule. If I ask a question, I will give the attorney ample time to answer. I will listen carefully to the answer. I will be courteous. If an attorney does not answer my question, I may not press him or her, but I will probably assume an evasive answer reflects an admission of a weak legal position on that point.”

In respect to brief writing, there are some things that practitioners can (and should) do make Judge Logue’s life easier. Although the judge has his law clerks pull key portions of the record for him (and he noted that the clerk, Mary Cay Blanks, “is incredibly nimble and quick in delivering the record to our chambers”), “it would certainly be convenient to me if lawyers would file very small appendices with no more than the one, two, or three documents from the record that are most important to resolving the appeal, such as the court order on review, the crucial transcript excerpts with a few extra pages for context, the affidavits, the will, the contract at issue, etc.” The judge also advises practitioners to keep their brief short, but if that is not possible, “at least make sure that your summary of argument and your captions provide brief, clear road maps of your argument.” He even noted that “in retrospect, I would have made my summaries of arguments shorter, no more than 2 pages.” Finally, when asked what his biggest surprise has been since taking the bench, Judge Logue said, “I taught the jurisdiction of the Florida courts, so I have no excuse. But the biggest surprise was the breath of the jurisdiction of the District Courts of Appeal. In the same morning I have heard cases involving torts, marriages, contracts, probate, criminal law, and real estate. It is one of the challenges and one of the pure delights of the job.” The judge also noted that “state appellate judges may be the last heirs of Atticus Finch, the last authentic generalists.” And perhaps a reference to Atticus Finch is the best way to close an article about a man who has provided such dedicated service to the citizens of this state, who has worn the white hat for thirty years, who has stood up for children in the foster care system, who has shared his love of our system of government with countless aspiring lawyers, and who is now poised to help shape the law in Florida. We, as lawyers, should look forward to seeing what good work Judge Logue can do on the Third District and welcome him to the bench.