Once you have determined that the use of Latin is appropriate, determine whether to italicize the word or phrase.4 It is a common misconception to think that because a word or phrase is Latin, it should be italicized. To the contrary, The Bluebook Rule 7(b) states that “Latin words and phrases that are often used in legal writing are considered to be in common English usage and should not be italicized.5 However, very long Latin phrases and obsolete or uncommon Latin words and phrases should remain italicized.” It also provides several examples of Latin words and phrases that are “often used n legal writing.”6 To determine whether a Latin word or phrase that is not listed in rule 7(b) is “often used in legal writing” or “obsolete or uncommon,” without making an arbitrary determination yourself, consult the latest edition of Black’s Law Dictionary.,7 For convenience, the following charts—which are not intended to be exhaustive—incorporate the examples provided in rule 7(b) as well as other examples not listed in rule 7(b), as provided in Black’s Law Dictionary (10th ed. 2014).8 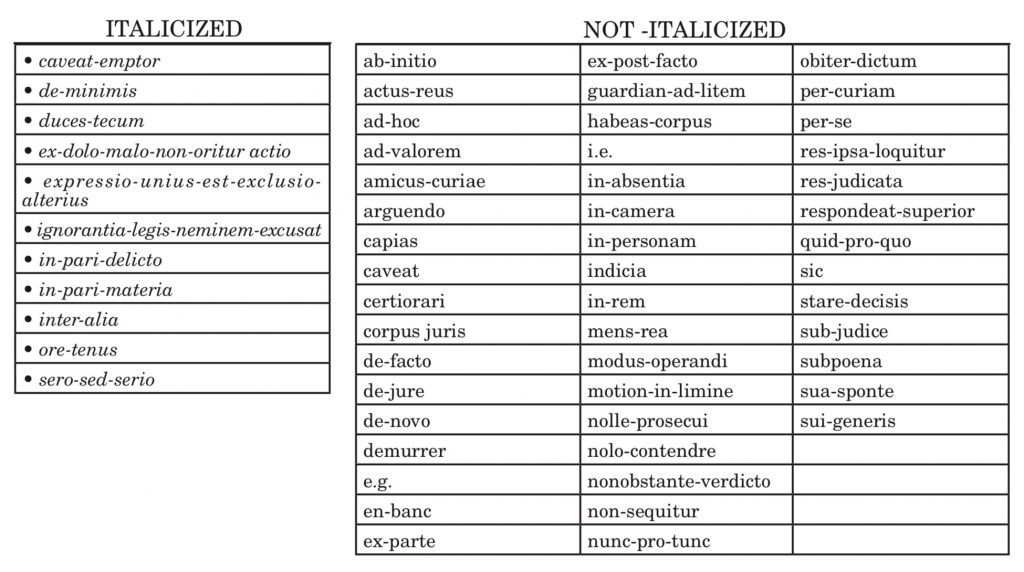 2See id.; see also THE REDBOOK: A MANUAL ON LEGAL STYLE § 11, at 215–24 (West Academic Publishing 3d ed. 2013) (stating “the trend today is toward plain language and away from the stuffiness and jargon-laced prose that characterized so much legal writing in the past” and recommending avoiding legalese); ANTONIN SCALIA & BRYAN A. GARNER, MAKING YOUR CASE: THE ART OF PERSUADING JUDGES § 44, at 113–14 (Thompson/West 2008) (recommending banishing needless Latin).

4In regard to nonacademic legal writing, The Bluebook permits the use of underlining in lieu of italicization. See THE BLUEBOOK: A UNIFORM SYSTEM OF CITATION R. B1, at 3 (Columbia Law Review Ass’n et al. eds., 19th ed. 2010). However, because underlining is archaic, puts more strain on the reader’s eyes than italicization, and obliterates the descenders of some letters (such as “g” and “j,” which then look like “o” and “i,” respectively), the use of underlining is not recommended in textual sentences. See REDBOOK, supra note 2, at 79–80 (“Underlining and all-caps styles are just hold-overs from the typewriter era and should be avoided altogether.”); SCALIA & GARNER, supra note 2, § 47, at 122 (“Nobody using a computer in the 21st century should be underlining text. To the extent that The Bluebook suggests otherwise, it should be revised.”); GARNER, supra note 1, § 4.3, at 78 (“Generally, if italic print is available, you should prefer it to underlining.”).

Join the Section for the 2018-2019 Monthly Audio Webcast Season