“Everything in nature works according to laws.” 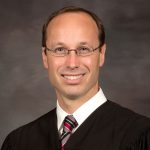 The above quote is more than just Judge Matthew C. Lucas’ favorite quotation, Kant’s words explain the course of his legal career. One fateful day, a neighborhood attorney gave a nine-year-old boy a set of Florida Statute books. It may seem like an unusual gift, but it was perfect for the bright child whose favorite show was Perry Mason and who now sits on the Second District Court of Appeal.

Judge Matthew C. Lucas was born and raised in Tampa, Florida. He was the youngest of three sons born to a Lutheran Pastor and a clinical technician.  From childhood, Judge Lucas gravitated towards structure and analysis. As a boy, Judge Lucas learned to play the piano. Just as laws create order out of chaos, instruments create music from noise.  Studying an instrument required dedication—learning to read the notes, following directions, and practicing ad nauseam. As Judge Lucas grew older, he expanded his musical repertoire to include the bass guitar, which he played in the jazz band at Plant High School. In fact, Judge Lucas and his friends even had a band of their own, until Judge Lucas left to study at Florida State University.

After graduating from law school with honors, Judge Lucas returned to Tampa to work a couple years for Carlton Fields before going to work for Bricklemyer Smolker & Bolves, P.A., where he specialized in property and construction law. As a litigator, Judge Lucas had the opportunity to appear before a variety of judges, which formed his opinion of how a judge should rule from the bench. Once several of his colleagues began to pursue judgeships, he also began to consider the possibility of transitioning to public service. In May of 2010, that possibility became a reality when Governor Charlie Christ appointed Judge Lucas to the Hillsborough County Court.

While on the county court bench, Judge Lucas presided over a docket that included nontraffic civil infractions and criminal domestic violence. He also served as a judge for teen court. However, Governor Rick Scott had another plan for Judge Lucas, appointing him to the Thirteenth Circuit Court in January 2013. While serving as a circuit judge, Judge Lucas presided over a family law docket.  Outside the courtroom, he was involved in the Tampa Family Law Inn of Court, the Thirteenth Circuit Pro Bono Committee, the Professionalism Committee, the Executive Technology Committee, the Florida Bar’s Business Litigation Certification Committee, and the Florida Supreme Court’s Committee on Civil Jury Instructions.

In 2014, the Florida Legislature created two new judicial vacancies for the Second District Court of Appeal.  In December 2014, Governor Rick Scott appointed Judge Lucas to fill one of those vacancies.  Judge Lucas is now a hardworking appellate judge who values the camaraderie and wisdom of his fellow judges.  He is also quick to praise the members of his staff, who help him navigate the steady stream of cases that flow through his office.  As you would expect from an appellate judge, Judge Lucas spends much of his time increasing his knowledge regarding the many areas of the law upon which he must rule.  Owing to his analytical nature, Judge Lucas appreciates the challenges his position presents and enjoys deciphering particularly “knotty” issues.  This comes as no surprise since, as expressed in his favorite quotation, the rational mind seeks to restore order and structure.

In addition to the many hours Judge Lucas spends at the DCA, he also serves on the Florida Bar Appellate CLE committee and the Florida Supreme Court Civil Procedure Rules Committee.  Further, Judge Lucas teaches Civil Procedure as an adjunct professor at Thomas M. Cooley Law School and Stetson Law School.  At the end of the day, having done his part applying the law to human nature, Judge Lucas goes home to his lovely wife, Alexis, and their two sons.

Lisa Martin is an Assistant Attorney General who practices in Tampa.  She recently celebrated her two-year anniversary at the Office of the Attorney General and currently works on capital criminal appeals.