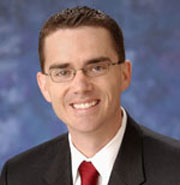 Born and raised in Sebring, Florida, Judge Eric J. Eisnaugle, the newest state court judge to join Florida’s Fifth District Court of Appeal, has always had a servant’s heart.  Judge Eisnaugle’s interest in the law started while he was a student at Sebring High School.  Although he knew he would go on to law school, he studied Economics and Business with a concentration in Finance while attending Florida Southern College.  He then attended Vanderbilt Law School in Tennessee, where he joined the National Moot Court team and graduated Order of the Coif.  He chose to attend Vanderbilt because it gave him the greatest sense of family of the law schools he was considering.  Luckily for him, that family feeling led him to start his own family, as that is where he met his wife, Carrie.  Now, 14 years after graduating from law school, he and Carrie are the proud parents of four children under 8, with their newest addition born this August 2017.

During his first summer of law school, Judge Eisnaugle clerked in Governor Jeb Bush’s General Counsel’s Office in Tallahassee.  At the time, Charles T. Canady, now a Justice of the Florida Supreme Court, was the General Counsel.  It was during that time that he learned the importance of listening to one’s constituents.  And during that summer, one of Judge Eisnaugle responsibilities was responding to “huge stacks of constituents’ mail.”  Every letter, no matter its length, received a response.

He split his second summer of law school between Foley & Lardner’s Orlando office and President George W. Bush’s General Counsel’s Office in D.C.  Both experiences were incredibly rewarding.  While at Foley, Judge Eisnaugle was placed in the Complex Commercial Litigation Group, but he gravitated toward John Hamilton, a well-respected appellate practitioner.  John was a tough critic, and nothing ever came back without a “sea of red” revisions on it, but he kept receiving assignments from John, so he figured he must have been doing something right.  When Judge Eisnaugle joined Foley after law school, he worked with John as much as he could.  He estimates 30% of his practice was assisting John with the firm’s appeals.  He remembers feeling a sense of accomplishment when John adopted an argument that he had written for a brief, in its entirety.  Not one to hand out praise, John signing off on Judge Eisnaugle’s work was praise enough!

The work at the President’s General Counsel’s Office was quite different, but just as rewarding.  He recalls spending the summer with two other clerks and two paralegals crammed in a large room.  Judge Eisnaugle did not have a desk:  a simple credenza had to suffice.  But, working on a bill, which the President proposed to Congress, gave him a brief introduction to the legislative process.  He would later put his experience clerking for both the Florida state governor and the President to work while serving in office himself.

After four years at Foley, Judge Eisnaugle decided to run for office.  He really felt he could make a difference.  When a seat came up due to term limits, he and Carrie made the decision to “go for it.”  He was elected to the House for District 40 and, after redistricting, was elected to the House for District 44.  When asked what was most rewarding about his service, he recalled several occasions when he became aware of something, perhaps due to a constituent’s telephone call, that “just wasn’t right.”  After looking into each issue, he set off to draft a bill from scratch.  But the issue was not on anyone’s “radar,” so he had to drum up support in the legislature by himself, including finding a Senator willing to sponsor the bill.  While starting from scratch does not make the job easy, Judge Eisnaugle said it was the most rewarding for him.

When asked what was difficult about the job, Judge Eisnaugle replied, “No one really talks about the sacrifice your family makes.”  Those who serve are gone for long periods of time and sometimes miss out on milestones in their family’s lives.  On more than one occasion, he’s had to drive almost four hours to the Capitol, after hearing from his kids, “Daddy, don’t go.”  Although he’s now working harder than he’s ever worked in practice or in the legislature, he is able to see his children every day.  He’s incredibly grateful for that, and with child number four having just arrived, he’s sure Carrie is too.

Having not taken the traditional route to the appellate bench, some may wonder what will Judge Eisnaugle uniquely have to offer.  Clearly, after clerking in the executive branch and serving in our state legislature, he provides a unique perspective on the separation of powers, and not only the legislature’s proper role, but the judiciary’s as well.  “Both have a critical and separate role, and both must be fully respected.”  Additionally, he has a first-hand perspective on legislative history.  “Legislative history is worthless to discern intent.  The only true reflection of the legislature’s intent is the language which was voted upon and presented to the Governor.  Everything else reflects only one legislator or staff member’s perspective.  If the written product passed into law results in an outcome not intended by the legislature, they can amend the statute.  It’s not the court’s job to do so.”  Having written and co-sponsored many bills, he knows the process all too well.

Although appointed to the Fifth District on May 8, 2017, Judge Eisnaugle did not sit for his first oral arguments until July 20, 2017.  He said it’s a very different experience than presenting oral argument as a practitioner, but he loves it nonetheless.  He appreciated being able to steer the attorneys through questioning to what he considered to be the important issues, something that is not always possible for a practitioner at oral argument.  Nick Shannin, an attorney at Shannin Law Firm, P.A., in Orlando, was arguing another case that day and observed Judge Eisnaugle in action:  “Judge Cohen made sure to introduce Judge Eisnaugle and advise the audience this was his first oral argument.  Judge Eisnaugle was clearly prepared and, although held back at first, asked a number of insightful questions resulting in answers that would reveal the correct determination of the case.  His preparedness, tone, and demeanor were exactly what practitioners hope for in an appellate judge.”

Judge Eisnaugle feels incredibly blessed with his transition so far.  He was able to retain two experienced clerks, one of which served as a clerk for now Florida Supreme Court Justice Lawson.  Additionally, Judge Eisnaugle has been impressed with the district court’s staff, who he describes as incredibly sophisticated and diligent.  The staff attorney’s job is both difficult and important, as they research the law and help sift through massive records on appeal to make sure nothing is missed.  “Our jobs would be ten times harder without the highly skilled staff we have at the Fifth.”

He has enjoyed getting to know his fellow judges, and is impressed with the great legal minds on the Fifth District.  He also appreciates the varied experience of the judges with whom he serves, and believes an appellate court benefits from a broad range of experience and backgrounds.

With four children under 8, Judge Eisnaugle does not have much free time.  If he’s not entertaining the kids, he likes to spend “as much time in the backcountry as possible.”  He has spent days on end hiking trails in Georgia and North Carolina, including parts of the Appalachian Trail.  He also recently summited Long’s Peak (a “fourteener” in Colorado) while out west to take a mountaineering course.  If that weren’t enough, he also took up triathlons just last year.

Judge Eisnaugle has always wanted to be a judge, but “for me, it was a dream job, so you just never know if you will have the opportunity.”  Obviously, he feels very fortunate to serve. 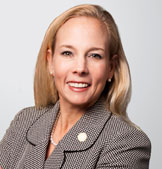 Jamie Billotte Moses is a board certified appellate specialist at Holland & Knight LLP.  Ms. Moses presently serves on the Appellate Board Certification Committee and is a former Chair of the Appellate Court Rules Committee.  Ms. Moses was the 2015 Appellate Practice Section Pro Bono Award Recipient.