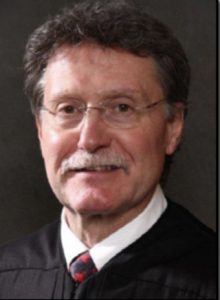 Judge Peter D. Webster explains many of the stages in his legal career as the product of “dumb luck.” Readers might disagree after reviewing his many achievements and considering the thought and effort he has put into both being a judge and improving the legal profession. But it is difficult to argue with his follow-up that one simply cannot plan a career in the law; you just work as hard as you can and it happens. If you could plan one, though, you would probably like for it to look a lot like Judge Webster’s. In June, Judge Webster left the First District Court of Appeal after nearly twenty years of service on its bench (and twenty-five years total as a judge) to join the Tallahassee office of Carlton Fields. At a time when much is uncertain for the future of Florida’s judiciary, the loss of a judge like Judge Webster, who champions the rule of law and professionalism, seems like a stroke of bad luck for Florida courts.

The first person in either of his parent’s families to graduate from college (at Georgetown University, no less), Judge Webster received a full scholarship to Duke University School of Law. He earned his J.D., with distinction, in 1974. The Massachusetts native thereafter settled in Jacksonville, Florida, where he clerked for Judge Gerald Tjoflat, then on the U.S. District Court. Judge Tjo flat has long had at least one Duke Law graduate on his clerk staff; with the assistance of a partner in the firm at which he clerked during his second summer of law school, Judge Webster became one of those Duke Law grads privileged to serve in Judge Tjoflat’s chambers. He credits Judge Tjoflat with providing inspiration and motivation for the legal and judicial career that was to follow.

After his one-year clerkship, Judge Webster went to work at Bedell, Bedell, Dittmar, Smith & Zehmer (and its successors), a natural (and, the Judge would say, lucky) fit for him, since he wanted to practice litigation. Upon learning of Judge Webster’s interest in litigation, Judge Tjoflat advised him that “if they’d have him, there was only one place to go and that was the Bedell firm.” Practicing complex civil litigation, with a smattering of appellate and white collar criminal defense work thrown in, Judge Webster eventually became a shareholder in the firm.

On another “lucky” day, while he was hard at work in the firm’s library, a colleague suggested he consider applying for one of two open circuit judge positions in Jacksonville. He took the suggestion to heart and in 1986, Peter Webster became Judge Webster. Just after his appointment, Judge Webster was informed by the Chief Judge of the Fourth Judicial Circuit that he would be assigned to the juvenile section. When Judge Webster advised that he didn’t have a background in juvenile law, the Chief responded, “you’ll learn.” And he did, studying juvenile law over the course of the next six weeks in preparation for what was to come.

Although there was much he enjoyed about serving at the trial court level, Judge Webster admits to a certain knack for and enjoyment of research and writing. (Though the rest of humankind might raise its eyebrows at this confession, readers of the Record will likely share his appreciation.) When positions opened at the First District Court of Appeal, he applied, and was appointed by Governor Lawton Chiles in 1991. Judge Webster, his wife (now of 22 years), Michele, and her preteen daughter made the move to Tallahassee.

Judge Webster advises that an appellate judge must adapt to the collegial process the collective decisionmaking of appellate panels requires. This feature of the court presented perhaps the biggest learning curve for the Judge; he was no longer captain of the ship in each case he worked on as he had been at the trial court. He also misses the interaction with lawyers he enjoyed at the trial court, noting that he doesn’t get to see 20-30 lawyers, as he would have in one typical day as a trial judge, over the course of six months at the First District.

Still, the position of appellate judge suits him better. He has had plenty of opportunities to enjoy the researching and writing part of the process. A review of but a few of the 398 opinions that a Westlaw search shows Judge Webster to have authored reveals a writing style that is clear and values getting to the point. These opinions begin with a concise sentence explaining quickly what the case is about. They do not expend extra space or effort waxing poetically about the subject at hand, but are well-written and a good read nevertheless. Judge Webster explains that the writing process comes naturally to him — he simply sits down and writes opinions from scratch, rather than drafting version after version. After completing his draft, complete with citations that he personally cite checked (preferring book rather than electronic sources in his research process), his law clerks thoroughly review the draft for substance and form.

In his spare time, Judge Webster is quite active in a number of professional organizations. Many of these organizations focus on professionalism in the practice of law, from the various Inns of Court in which he has participated and held leadership positions through the years (including the First District Appellate American Inn of Court), to the American Judicature Society, the oldest non-partisan organization in the country dedicated to improving the administration of justice. His commitment to professionalism in the legal community does not stop at his extracurricular activities. He has written several law review and bar journal articles on topics related to the improvement of the legal profession and the judiciary, including his most recent article, Ethics and Professionalism on Appeal.1 Just about every day he sees some professionalism problem in those practicing before him: as he puts it, judges see the “least desirable elements of humanity.” Judge Webster notes that as in all walks of life, some attorneys simply were not “raised right” and bring their particularly egregious lack of manners to the appellate practice world. These lawyers tiptoe around the ethics laws, but it is clear that making money is more important to them than what they should be focused on: improving society and providing competent representation to their clients. (For some particularly heinous examples, check out Judge Webster’s article — from curse words in a motion for rehearing to calling the trial judge’s fact-finding “baloney,” this article shows the true depths of appellate practice.)

Now Judge Webster will get to put to use all that he’s learned and observed on the other side of the bench as he returns to private practice this summer. He is looking forward to practicing with the group at Carlton Fields, as well as all of the appellate attorneys he’s had the privilege of serving as a member of the executive council of the Florida Bar’s Appellate Practice and Advocacy section nearly every year since its formation in 1994. He is conscious of the fact that he now has a significantly better understanding of what captures a judge’s attention, a trade secret he was unwilling to divulge with the author (even when she promised to keep it to herself).

While Judge Webster’s future is looking rosy, he is not as upbeat about the future of Florida’s third branch of government. Commenting on the current legislative proposals for the court system, Judge Webster notes that he has never seen an attack on the judiciary quite like this one. As PresidentElect of the American Judicature Society, where he has the opportunity to discuss such matters with attorneys around the United States, he can attest that Florida’s court system is not the only one facing this assault. None of the proposals, he maintains, have any hope of making our judiciary better — instead they seemingly seek to make the courts a “minion” of the other branches. Subservient to the other branches and special interest groups, he explains that our judiciary stands to lose the critical independence on which our system counts.

In one of his law review articles, Statutory Construction in Florida: In Search of a Principled Approach,2 he, along with his co-authors, Sylvia Walbolt and Christine Davis, recommends that judges facing the myriad rules of statutory interpretation remember to respect the legislature’s role in drafting the statute at issue. But he rejects the suggestion that courts have shown a lack of respect to the other two branches similar to that being shown by the legislature for the courts today. Most judges, he notes, take their jobs very seriously and are simply trying to do the right thing when they write their opinions. That being said, he continues, courts must bear in mind that when they review a statute, it is the product of a co-equal branch of government.

As he summed up, good judges want their decisions to fold in with the fabric of the law. The corpus of the law is a fabric that should lie flat — tears and snarls in the fabric result in a muddying of the law, creating bad precedent or ambiguity in an area requiring clarity. In Judge Webster’s case, we were the beneficiaries of the “dumb luck” that brought him, a jurist who embodies so many of the qualities we hope to see in the members of our judiciary, to the First District.

Courtney Brewer has been a Deputy Solicitor General for the State of Florida since the fall of 2007. Before joining the SG’s office, she was a clerk for Justice Charles Wells at the Florida Supreme Court. Like Judge Webster, she is an alum of Duke Law.