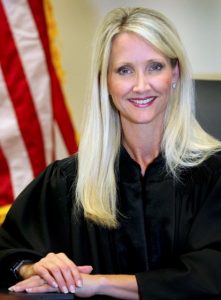 In 2012, Judge Wendy Berger became the third female to serve on the Fifth District Court of Appeal. Judge Berger grew up in Jacksonville, Florida, where she attended high school at Stanton College Preparatory School. She was involved in theatre both in her high school and in her community. Her interest in acting brought her to Florida State University where she started out majoring in theatre. Her father, Bob Williams, a corporate lobbyist for the paper industry, was wondering what she would do with a theatre degree. His question was answered when Berger ultimately graduated with a degree in communications, continued at the FSU College of Law, and fell in love with trial work. He often quipped, “I think all that theatre work really helped you out in court.”

Having interned at the State Attorney’s office in Jacksonville for two summers, upon graduation in 1992, Berger landed a job as an Assistant State Attorney for the Seventh Judicial Circuit in the small town of Bunnell in the juvenile and misdemeanor division. Fresh out of law school, her supervisor handed her a stack of les, pointed, and said, “The courtroom’s that way.”

Berger moved to St. Augustine in 1994. She was only 25 years old and by that time was handling a felony case load. By the time she left the state attorney’s office in 2000, she had prosecuted every possible type of case that an assistant state attorney could handle – from simple traffic cases to homicides.

In 1997, Berger married Larry Berger, and they have two children. Georgia (11), loves art and is an avid horseback rider, and Griffin (15) plays high school baseball and travel ball. Because herchildren are her number one priority at this stage in her and her husband’s lives, Berger’s been known to take the appellate briefs from cases she’s working on to Georgia’s riding lessons and Griffin’s baseball games.

In 2000, Berger was appointed Assistant General Counsel to Governor Jeb Bush and served as his clemency aide. As Assistant General Counsel, she was responsible for advising Governor Bush on death penalty cases and other issues related to criminal and juvenile justice.In particular, she monitored the procedural advancement of all prisoners on Florida’s death row, prepared the death warrants and all other related documents for the Governor’s signature and acted as a liaison with the Florida State Prison, Attorney General’s Office, Capital Collateral Regional Counsel, and Florida Supreme Court until the execution of sentence. Berger also reviewed extradition requests, requests for international prisoner transfers, and executive orders involving state attorney special assignments and the suspension and removal of elected officials. She helped draft and review legislation, reviewed requests for independent investigations by the Florida Department of Law Enforcement, responded to victim and other constituent issues, and provided legal counsel to the Executive Office of the Governor and designated Governor’s agency general counsels. She was also involved in interviewing candidates nominated for judicial appointment and provided counsel to the Governor regarding the selection of those judges.

As Governor Bush’s clemency aide, Berger offered counsel on all issues related to executive clemency, including whether the various forms of executive clemency such as the restoration of civil rights, remission of fines, commutations, and full pardons should be granted or denied.

Berger continued as Assistant General Counsel and clemency aide until 2005 when Governor Bush appointed her to the Seventh Judicial Circuit Court where she served as the first female circuit court judge in St. John’s County. Berger was assigned to the civil and probate division for a little over a year before moving to the criminal division, where she presided over every adult felony case in St. Johns County and earned a reputation for being tough. She also presided over the St. John’s County Adult Drug Court.

When Berger began to describe the program, her eyes lit up. “You can actually see people’s lives transformed,” she said. Berger described the post plea program, noting that it is offered only to nonviolent offenders pleading to second or third-degree felonies. The program incorporates community service, drug testing, group meetings, and counseling. The offenders are on probation and report to the court. “It is a reward and sanction-based program grounded on personal responsibility. The goal is to divert offenders out of prison and jail, and get them back on track so that when they complete the program, they can become productive members of the community” Berger noted. “If you can fix the drug problem, hopefully, you can fix the crime problem.” She added, “The program should last one year. Some people finish in a year; it takes others longer – some up to 5 years. Not all make it but for the ones that do, it is incredibly rewarding. I support drug courts 100 percent.”

“Unfortunately, our prison system has a revolving door,” Berger stated. “Often times, we know very little about the people we send to prison other than what appears in their case le and on their scoresheet.” She noted, “Drug Courts are different. In drug court, you get a chance to know the participants as they progress through the program. There are certainly ups and downs through each participant’s journey, but when the light finally comes on for them and you get to witness their transformation, that’s when you know your work has meaning.” Berger’s goal was to help the participants help themselves and she misses that aspect of being on the trial bench. “We did some good work in St. John’s County.”

Berger was appointed to the FifthDistrict court of Appeal in August 2012 by Governor Rick Scott. Berger enjoys the appellate court. She finds it much more academic and intellectually challenging than the circuit court. “I enjoy reading and writing and getting a chance to learn new areas of the law,” Berger said. She also enjoys having the time to reflect on the law and how it applies to the various issues and nuances associated with a particular case; a luxury she did not have on the circuit court. Also, because she came primarily from a criminal background, Berger noted that she does not instinctively have a plaintiff or defense bias in the civil arena.

Judge Berger stated that if she could give any advice to practitioners it would be, if your client can afford it, to have an appellate lawyer at trial to provide trial support, and preserve potential appellate issues. She warned that countless appeals are lost because issues are not preserved below.

As for appellate briefs, they “should be concise,” Berger advised. “Just because you have a 50-page limit doesn’t mean you have to use it, especially in a case with only one or two issues. Some of the best briefs I’ve read are short and to the point.” She recalled her days on the trial bench reminding attorneys just before closing arguments that “the mind can only absorb what the posterior can endure.” Bringing that logic to the appellate court, she says the same can be said for the eyes. Berger also noted that professionalism in brief writing is always important.

Wasting space in a brief with disparaging comments about opposing counsel or the trial judge in no way benefits your client and only distracts from your argument.”

In terms of oral argument, “knowing your case is most important.” Judge Berger also suggests that it is not always necessary to utilize the entire time allotted, especially if the court is not asking any questions. “If you have addressed all the points you need to address, it is alright to rely on your briefs and sit down.” She also notes that not every question from the panel is hostile. “Learn to recognize the friendly question because they serve a purpose.” She also warns “be careful what you concede.”

As the interview came to a close, the conversation turned back to drug court. Berger needed to get back to St. Augustine because she was attending graduation that evening for several of her offenders who had completed the program. She looked forward to seeing them and hearing about their progress.

Several more of Florida’s citizens were kept out of jail and off the streets as a result of drug court. Although she’s now in Daytona Beach interpreting the law and making an impact throughout Florida, Judge Berger’s legacy continues in St. Johns County.