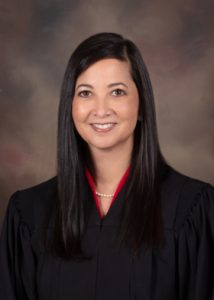 Judge Andrea Teves Smith began working at the Second District Court of Appeal on February 1, 2019. As I walk into her office, I notice it is decorated with impactful quotes from significant figures. I am drawn to one quote, in particular, located on her desk, from Justice Sonia Sotomayor: “Judges can’t rely on what’s in their heart. They don’t determine the law. Congress makes the law. The job of a judge is to apply the law.”

Q: I know Justice Sotomayor was a bit after your childhood. Who was someone you admired growing up?
A: As a child growing up in the 80s, I found Sandra Day O’Connor to be very inspiring. I had always hoped to become an attorney, so it was exciting to hear everyone talk about the first woman appointed to the United States Supreme Court.

Q: Wow, so you always knew you wanted to be an attorney?
A: Oh yes. When I was nine I drafted an affidavit on behalf of my sister after she was pushed off a bike.

We both laugh. She tells me she still has the affidavit framed in her house as a memento. I ask about her family. Her parents were both in the medical field—her father is a retired anesthesiologist, and her mother was a nurse. But it was the stories about her grandfather, a judge of 40 years in the Philippines, that inspired her to follow the legal path.

Judge Smith received her bachelor’s degree from the University of Florida and obtained her juris doctor from Stetson University College of Law, where she was active in moot court. She recalled one competition in which she argued both sides of a case at the United States Court of Appeals for the Eleventh Circuit. She said she loved the thrill of it and ended up clerking for a Tampa firm in their appellate department. After she was admitted to the bar, Judge Smith worked as an associate, and later became a shareholder, at Peterson & Myers in Lakeland.

Five years ago, Governor Rick Scott appointed Judge Smith to the Tenth Judicial Circuit. While on the Tenth Circuit, she started in the felony division and then worked in the family and civil divisions. She later served as administrative judge over the civil divisions. Chief Judge Jacobsen of the Tenth Judicial Circuit described Judge Smith as an intelligent, articulate judge who writes well. He said he appointed her as the administrative judge over the civil division because she was the go-to person for civil law. He also added the Second District was lucky to have someone who had such extensive trial experience because she understands what happens in the courtroom from moment to moment.

As for hobbies and other interests, Judge Smith explained that she always worked hard, which meant working long hours. She added, however, that, “even from my early days as an associate, I always made sure to plan a vacation—a good vacation.” She travelled to exciting places but found that she loved skiing the most. Her husband and two daughters also love to ski. As a family, they have their favorite places that they visit but they still enjoy finding new slopes to explore. Judge Smith also enjoys reading books of all types. When asked what type she finds herself reading most frequently, she replied, “I would say mystery and suspense—but that’s probably because my family usually gives me Grisham novels as gifts.”

As for her advice for practitioners, Judge Smith emphasized clarity in writing— knowing your audience and making sure you have expressed exactly the relief you are requesting. She also indicated that is important to proof your own work, and then, ideally, to have someone else proof it for you. It seems that Justice O’Connor would agree, having once said, “I don’t know that there are any short cuts to doing a good job.” 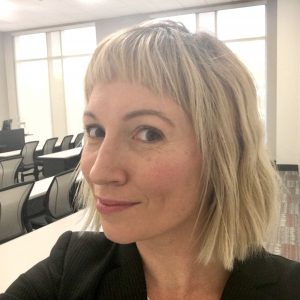 Amanda Glass is currently a staff attorney at the Second District Court of Appeal in Tampa. She also teaches legal research and writing courses at the University of Tampa.